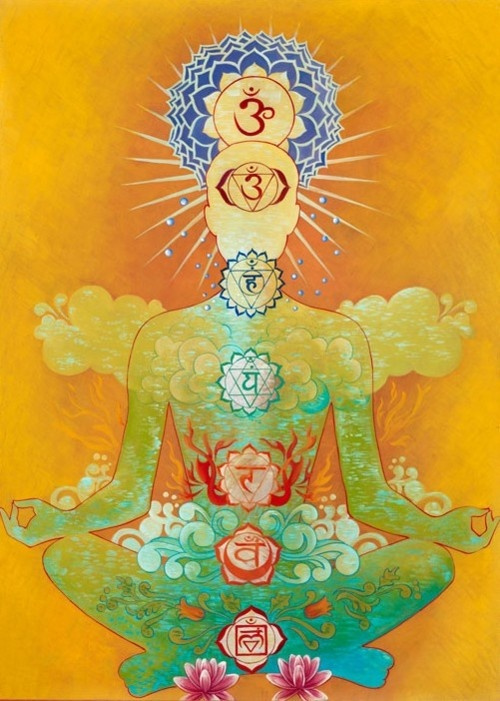 THE ENERGETIC INFRASTRUCTURE OF THE HUMAN BODY

Energetic Infrastructure of the human body, also called the Subtle Bodies or the Astral Body. It consists of the “CHAKRAS” and the “NADIS”, or “Meridians” in the Chinese Taoist System. “PRANA”, or “CHI” in the Chinese Taoist System, is the Vital Energy, the Life Force which flows through the Nadis and Chakras as well as all living bio-systems. Prana enters the body through the air we breathe as well as the food we eat; yet, these are not prana in themselves. They are vehicles in which we receive prana. Prana also enters the body through all the pores in our skin, known as Cutaneous Respiration in Western Medicine.

Prana the life force energy controls the bodily functions. Prana flows throughout our body through the subtle energy channels Nadis in a similar way as oxygen flows through our body, and is circulated via the blood through veins, arteries and capillaries. In the Yogic System there are 72,000 Nadis/Energy Channels in the body through which Prana flows. Western doctors spent some-time dissecting cadavers looking for these subtle energy channels to no avail. You cannot find living energy where there is no longer life. Dr. Hiroshi Motoyama, an eminent Japanese scientist working in Southern California has invented sensitive machines for measuring the subtle energies of the body and has published a collection of books on the subject.

Of the 72,000 Nadis, three are the most important: Ida, Pingala and Sushumna. The Ida (Lunar Nadi/Left Channel) which is related to the Parasympathetic Nervous System, the Pingala (Solar Nadi/Right Channel) which is related to the Sympathetic Nervous System, and the Sushumna (Central Channel) which is related to the Central Nervous System. These three Nadis interconnect the Chakra System. The Sushumna Nadi starts at the perineum, the base of the spine, the location of the Muladhara Chakra, and extends up the Sushumna Nadi through all the chakras to the Sahasrara Chakra at the crown of the head. The Ida and Pingala Nadis begin at the Muladhara Chakra and flow up either side of the central column, Ida on the left, Pingala on the right, meet at the Ajna Chakra and terminate on either side of the nose.

There are seven main Chakras. Chakra means wheel/vortex of energy, they are also referred to as Psychic Centres. In modern physics terminology, these would be called Hyperbolic Energy/Force Fields. Originally, the ancient Sages/Rishis/”Seers” were able to “see” these Chakras/Energy Centers Clairvoyantly. The Chakras are the Master Energetic Controls of the Energetic System which in turn controls the Physical System. In Yoga it was postulated that the Chakra System controls the Endocrine System and energy flow through the Central Nervous System and the Autonomic Nervous System, which regulates, directly or indirectly, the homeostasis and the health status of the human body. Disease and energy blockages in the body affect the Chakras causing them to rotate slowly and/or erratically. In a perfectly healthy person all the Chakras rotate at the same speed and smoothly.

Everything we do in these Hatha Yoga Classes is intended to invigorate and harmonise the Energetic System, to clear any blockages in the Nadis and induce the Chakras to rotate optimally for the purpose of radiant health in the Physical Body. Furthermore, it also improves flexibility, strength, peace of mind, well-being, concentration and neurophysiological and ordinary body functions.

The Kundalini-Shakti, represented as the coiled sleeping serpent, is the dormant Universal Kosmic Energy located at the base of the spine, the Divine Feminine Energy. When activated in advanced Yoga practices, it ascends through the Sushumna Nadi in the centre of the spinal cord to unite with the Divine Masculine Energy, pure consciousness or Shiva, at the Ajña chakra. In Tantric literature this is known as the union of Shiva and Shakti or Ananda/Ecstay/Bliss. These are the divine masculine and feminine energies intrinsic within every human being united within the Divinely Activated human body.

The Chakras are represented as lotuses. The lotus is a symbol of purity and the spiritual path in the East, representing the three stages or levels a person must pass through in spiritual life. The lotus sprouts in the mud, symbolic of ignorance, the growth through the water to reach the surface is symbolically seen as the work an aspirant must do to reach illumination/enlightenment/self-realisation, which is symbolized as the lotus reaches the air and opens.

The number of lotus petals for each chakra is determined by the number and position of the nadis connecting to that Chakra. Each petal has a Sanskrit letter inscribed on it which corresponds to the sound vibrations produced from the energy of the Kundalini Shakti. There is also an associated colour, bīja mantra, yantra or geometric shape, animal and divine being in the pictorial representations of the chakras which are used in visualization practices. Each chakra is a centre of subtle awareness which has a specific feeling and is a storage place for latent energy forces and characteristic states of consciousness.

The practices for awakening the Kundalini Shakti and activating the full potential of the Chakras are advanced and best practiced under the guidance of a qualified teacher. It requires great dedication, preparation, humility, purification and persistence. A safe environment, like a well-chosen Ashram, is best where there is support and little distraction. In our modern Yoga practice we can work with the Chakras through concentration on their trigger points. In Yoga practice we only concentrate on the central five chakras: Svādhisthāna, Manipūra, Anāhata, Vishúddha, and Ājñā.

As we are work with this subtle energetic system we activate/elicit the benefits within our physical bodies via better health, better sleep and overall well-being. This is through the direct benefits of Mantras, Pranayamas, Surya Namaskar, Asanas and Relaxation, which activates, energizes, harmonizes, stabilizes and equalizes the prana in the nadis and chakras, which in turn activates, energizes, harmonizes, stabilizse and equalizes the nervous system of the physical body, the respiratory system, the circulatory system, digestive system, the immune system and the endocrine system.

The vital endocrine system is somewhat mysterious playing an overall role in physiological processes, yet not very well understood. The ductless glands secrete hormones/chemical substances into the bloodstream which are carried throughout the body to act on various organs. It is through theses glands that we have the most phenomenal pharmacopeia within our bodies, especially the brain. The best laboratories in the world are unable to replicate them.

Yogis have long understood the connection between the Chakras and the endocrine glands and through the activation of certain energies in various chakras, certain hormones are released from the corresponding glands. Some Yogis have attained great mastery over their physiological functions through this understanding, including how to stay alive while buried underground for long periods of time, and how to lower the heart rate at will.

The pituitary gland is known as the master gland regulating all the other glands in the system, stimulating and inhibiting their secretions as needed. Through increasing blood flow through to the head and the stimulation of the nervous system, the hypothalamus is stimulated, which regulates the pituitary action. Inverted asanas are the most beneficial to the pituitary system for its uses gravity to increase blood flow to the brain.

The pineal gland, a tiny gland in the brain, has had the most worldwide attention of all the glands in world history. There are numerous poetic representations of this gland found throughout many cultures, identifiable by representations reminiscent of a pinecone. Known as the third eye, it acts as a window to higher psychic faculties. Through stimulation of this gland, powers of awareness, intuition, visualization and imagination can be increased. Inverted asanas are also the most beneficial way to stimulate the pineal gland via gravity and “hydraulic pressure” of increased blood flow to the brain.

The thyroid and parathyroid glands located in the neck are connected to the Vishúddha chakra. The thyroid controls rate of metabolism, body heat, growth and development. Hypothyroidism and hyperthyroidism are very common, mild conditions that can create discomfort in daily life. Often the cause is unknown, but extreme conditions are generally regulated through drugs. Through Yoga practice the throat area is alternatively pressed and stretched, which stimulates normal balanced secretions of the thyroid. The same is true for the parathyroid which is concerned with the metabolism of calcium and phosphorous needed for strong, healthy bones.

The thymus gland located at the centre of the chest, is primarily concerned with immune system functions and production of antibodies, which act as a defense against bacteria, viruses and disease. Larger in children, the thymus gland shrinks with age and presumably decreases in function. In pranaasana we bring the hands together at the chest in prayer/unification position. This stimulates the thymus through concentration on the Anāhata Chakra. This pose naturally induces the practitioner to introspection looking within to connect with spirit and feel inner love.

The adrenal glands, two small bodies located on top of the kidneys, are most notable for their production of adrenaline, which acts immediately on most of the vital organs in times of emergency. Overproduction of this hormone is prevalent today in our fast-paced, high-stress world. Through Yoga practice the adrenals are internally stimulated “massaged” helping them to function optimally. The pancreas is compressed and “massaged” during Yoga practice helping to keep a normal, healthy production of insulin and fight off diabetes.

The reproductive systems in both men and women are “toned” and “massaged” during Yoga practice to maintain healthy hormone secretion. In women, the ovaries are stimulated more than the testes of men. This helps correct menstrual irregularities and the unnatural pains of menstrual “cramps” and mood swings of PMS. It also helps to strengthen the pelvic region and optimize conditions in pregnancy and childbirth.

Now that we have discussed the Energetic Infrastructure of the human body we have a general understanding of the subtle energy channels and chakras in the Yogic model. We can see how important Yoga practice can be in modern times in which we live for health and well-being. Furthermore, we begin to understand how the well-known stress relief effects of Yoga via Asanas, Pranayamas, Mantras, Relaxation, Inner Contemplation and Concentration does indeed help us unify Mind, Body and Spirit.